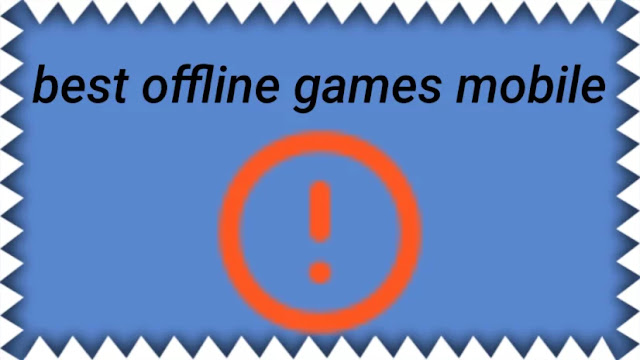 best offline mobile games (offline) is what I will share with you in this article.

best offline android games 2021, has become one of the most searched things on Google. The reason is that most of the gaming companies are only interested in creating online games like Free Fire and other games.

If you go to the Play Store, you will only find games that work on the internet. While offline games are very few. So even if you find it, you might not like it.

But on this topic that I presented to you, I came to you top 10 best offline games for android 2022, which are various games and from different fields. You will not get out of this topic until you have found the game you are looking for.

Note: this topic is the second part. Because I already gave you top 10 best offline games for android 2022 too. I advise you to check it out.

Mini Metro is a subway simulation game for Android that won the IGF 2016 award and was voted Best Mobile Game in 2016 by Gamespot's.

The idea of ​​Mini Metro is to design a map compatible with the subway in a remote city. And you have to draw the train tracks on the map and then start running the trains. And you have to show your design skills to be able to go to other cities.

The game is available in more than 20 cities.
Daytime and nighttime patterns.
Compete against the world in map design.
The game is ad-free.
The size of the game is very light, you can play it on any phone.

If you are a fan of car racing games and car climbing. Hill Climb Racing will be the best option for you. It is considered open world car games android.

The idea of ​​Hill Climb Racine game is that you drive a car through various tracks, hills and many obstacles that appear in front of you, and the goal is to reach the highest level. Without your cars exploding.

While playing and on the way there are coins, you need to collect as many as you can. To fix your cars on the road. Hill Climb Racing is an amazing offline game with many features.

Do great stunts in the air while jumping.
More than 29 cars, you can choose the right car for you.
You can also make a car according to your mood.
Many and varied paths.
The game does not need a network.

If you are looking for best farm games offline, Stardew Valley is one of the best Android games that you will try in this field. Unfortunately, the game is not free, but must be purchased for only $ 5.

In this game, you will move to the countryside, start a new life and build the farm of your dreams. She is best offline mobile rpg games. It is similar to Happy Farm, but it works without internet.

Design the farm as you like.
Cultivation of agricultural crops of all kinds.
You can raise animals inside the farm.
Settle in and start a family of 12 people.
Participation in seasonal festivals.
You can produce farm income from artisans and sell it.

Traffic Rider is one of the open world racing games android
offlinegames. This game is amazing in every sense of the word.

In Traffic Rider, you can run endless races and reach high levels. In this game you don't have to respect the traffic light. Rather, you have to drive at top speed and overcome obstacles.

You can see the camera from your point of view.
29 assorted bikes.
Real sounds of bicycles and traffic lights.
The game supports 19 languages, including Arabic.
I drive fast. The higher your score.
And many more features that I will let you discover on your own.

PinOut is one of the best classic offline games. This is the opinion of someone who reviewed the game on the Play Store.

And if you ask about their negatives, simply if you lose, you will come back from the beginning. Unless you want to buy and open the save feature from somewhere else, and the feature will stay with you forever, unless you lose your email account of course.

But this does not mean that repetition bores you, but rather that it will make you notice more things each time you go through a stage, including things that will benefit you in the progress or surprise you.

The idea of ​​PinOut is that there is a ball that travels through time. In a constant outfit on the way to a ferry, everything in front of her was shattered. one of best offline mobile games.

The game is network free and ad free.
An iron ball breaks everything in front of it.
Fun roads and turns with excellent graphics.
A classic game of unlimited intelligence.

Iron Blade: Medieval Legends RPG, one of best offline action games for android free download role-playing games for Android. that you will test on your phone.

Iron Blade: Medieval Legends is one of the best action games that revolves around medieval times on the European continent, which was plagued with conflicts and disputes.

An army of the devil comes to war and destroys everything. And you must equip your sword and your castle to kill the mutants and drive them off the continent. Collect powerful weapons and hunt demons to kill them.

Discover the options and intrigues that surround you.
Explore a world full of fantasy within the European continent.
Kill demon knights and vampires.
The game has high-quality graphics.
Deadly moves and devastating spells can be used.
The game supports the Arabic language without bugs.

best games you can play offline, If you are a fan of escape games without the net, challenging games are full of puzzles, then Can you escape the 100 room 13 will be the best choice for you.

This game has been played by everyone who has played it, and its ratings are very high on the Google Play Store. This game has many parts, all of which are admired by everyone. It is also classified within ggy girl offline games.

The idea of ​​the game is that you must escape into 100 rooms and use your brain to solve the puzzles that stand in your way. The game has many features that I will let you discover for yourself.

Join to play with players from all over the world without internet and enjoy fighting and defeating enemies. Dawn Break, the original version, received a lot of criticism on the Play Store.

Cover Fire game, from best offline mobile games. In this game you have to be the leader of the battle and become a sniper like no other.

Coverfire is a Sniper FPS Ops game, if you are a fan of snipers, you will love this game. It contains wonderful and fun events like the zombie event that forces you to eliminate all the zombies with the sniper.

Play without internet and for free.
High quality graphics and resolution.
Very realistic weapons that make you feel excited.
You can prepare your own fighting teams.
You can control the battle and give orders.
Plan how to defeat the enemies yourself.

Subway best games you can play offline, although it is Subway Surfers game, it is among the best popular popular games in the world. However, there are many game lovers who have not tried it yet.

She is considered best android games without internet years old, so it was necessary to refer to her in our topic, despite her fame.

It is a free offline game without the Internet, the size of the game is very small, about 94MB, compared to its features, it is a game worth trying. The game has received more than one billion downloads.

Subway revolves around a boy, and you can transform into other characters like a ninja, and this boy is being chased by the heart of a policeman and a dog on the train tracks.

Your role is to guide this child along the correct paths that he must follow, avoid colliding with the oncoming trains and overcome obstacles as well.

There are also coins to collect as you race down the train tracks. The more rewards and coins you get, the more you will advance to the levels indicated and you will unlock new characters.