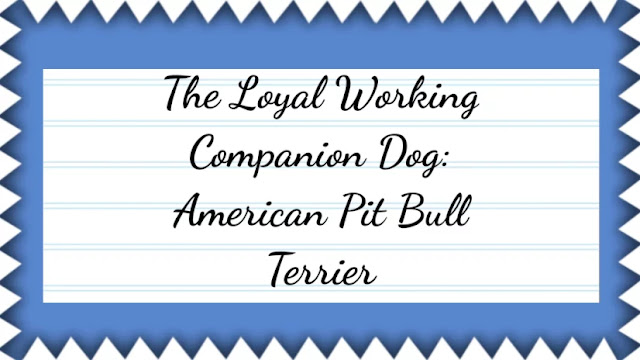 This breed of dog, also fondly called as APBT, is known for its loyalty and intelligence. The dogs with this breed make excellent companions since they are very aggressive because of their protective nature.

How, then, are they different from the Staffies? For the UKC or the United Kennel Club, Staffies and APBT are of the same breed but many disapprove of this suggestion. For instance, if the American Kennel Club has an American Staffordshire terrier, it will be registered as an American pit bull terrier by the United Kennel Club. Furthermore, many breeders noted that their lineages have been separate for a long time already for these dogs to be still considered as having the same variety.

The following are some of the basic facts breeders would really love to know about APTBs:

Temperament: courageous, full of energy, and loyal; should be socialized early on with other animals especially with children

• Brush their coat only occasionally using a brush with firm bristles.

• Rub down their coat with a towel or a chamois to remove hairs that are loose.

• Their physique requires a regular exercise routine which includes a daily play time and/or running along a bicycle while on a leash.

• They should be on leash while walking in public places.

The ancestors of APBT came to the US in the mid-1800s with some Irish-Boston immigrants. Like the Staffie, they were originally bred from bulldogs and terriers. Since APBT is a forerunner to the Staffie, it was also molded to be a fighting dog. However, the Americans made their variety some pounds heavier and trained them to have a more powerful head.

Bull baiting and dog baiting were prohibited in England so bull terriers were no longer bred for bouts.

It is in America where the pit bull also gained its popularity for many uses and reasons like:

1. It was used to embody the country in one WW1 artwork.

2. Well-known companies like the Buster Brown Shoe Company and even RCA used the breed as mascots.

3. Petie, a pitbull, was one of the stars in, “Our Gang”, a well sought children’s TV series.

4. A mix breed called Stubby was transformed into a popular and decorated WW1 hero.

5. Pits became good companies of pioneer families on their journeys.

7. Popular people like Helen Keller and US President Theodore Roosevelt owned the variety.

Here is some history about the cause of dilemma regarding the registries of APBTs.

It is interesting to note that Petie, which was one of the stars in the, “Our Gang” TV series was the first breed that was dual-registered to be Staffordshire Terrier/Pit Bull. However, the UKC later started registering other performing-type varieties and they also began holding dog shows comparable to those of the American Kennel Club.

The AKC soon sealed its studbooks to APBTs. They allocated registration to those pit breeds with lineages that are listed as Staffies. For a little time during the 1970s, the AKC disclosed the American pits to their studbooks.

Nowadays, the pit has employed as search and rescuers, police/armed service dogs, livestock workers, and even as therapy animals because they are good as companions and working dogs.

Moreover, the variety can even compete in dog sports such as herding, obedience, and conformation, French Ring, and Schutzhund. Breeds of this type can be very loving as pets for everyone. The physical demands and harshness of various activities developed a healthy, strong, and stable animal.

If you want to have an APBT as a pet, be sure that the puppy is handled well and properly socialized. A solid and good training will surely produce an obedient, tranquil, and good companion or even a working dog!